BRITISH VIRGIN ISLANDS (June 8, 2017) – This summer, saltwater sportsmen from around the world can once again experience the August full moon in private island luxury at the second annual Scrub Island Blue Marlin Invitational, August 3-6. The event will be hosted at Scrub Island Resort, Spa & Marina, a luxury AAA Four Diamond resort close to the BVI fishing grounds and the renowned North Drop.

The result of numerous requests from billfish tournament teams, owners and captains, the Scrub Island Blue Marlin Invitational was created by Captain Skip Smith to give blue marlin enthusiasts easy access to exclusive fishing grounds and a protected harbor. This year’s event will once again take advantage of the North Drop bite during the August full moon, ensuring the invitational will maintain its reputation as the “crème de la crème” of blue marlin bliss.

Captain Skip and Scrub Island Resort collaborated on the tournament with the hope of attracting U.S.-based teams who take advantage of the summer full moons, as well as teams from the Virgin Islands, Puerto Rico and the Dominican Republic. 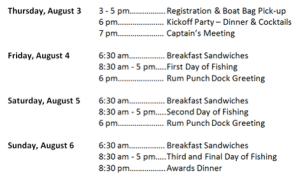 Opened in July 2010, Scrub Island Resort, Spa & Marina is named after its location, a serene 230-acre private-island haven situated at the east end of Tortola in the British Virgin Islands. A luxury, AAA Four Diamond hotel and the first member of Marriott’s Autograph Collection in the Caribbean, the resort is tucked into a rugged cliff overlooking the Atlantic Ocean, Caribbean Sea and neighboring islands. It features 52 guest accommodations as well as a collection of two-, three-, four- and six-bedroom villas, the intimate Ixora Spa, world-class restaurants including the popular Caravela, three private beaches and a 55-slip marina. For more information, call toll free U.S. 813-849-4153 or visit scrubisland.com.

Mainsail Lodging & Development is a Tampa-based hospitality company that develops and operates lodging products in the Southeastern US and the Caribbean. Their properties include Scrub Island Resort, Spa & Marina (ScrubIsland.com), a private island resort in the British Virgin Islands and member of Autograph Collection® of Marriott International; Mainsail Beach Inn (MainsailBeachInn.com), a boutique beachfront hotel on Anna Maria Island, Florida; and the boutique food-focused Epicurean Hotel (EpicureanHotel.com) in Tampa, Florida. The company also operates corporate housing throughout the Southeast, exclusively managing the Florida market for Oakwood Worldwide® under both its ExecuStay® (ExecuStay.com) and Oakwood® (Oakwood.com) brands, while also operating ExecuStay (ExecuStay.com) in Georgia, portions of Alabama, and The Carolinas. Mainsail is developing their fourth hotel, Waterline Marina Resort & Beach Club on Anna Maria Island, Florida, which is under construction and slated to open in the Summer of 2017. Two additional Florida hotels are planned for 2018 and 2019, respectively – Fenway Hotel in Dunedin and Luminary Hotel & Co. in Fort Myers. Mainsail Lodging’s corporate charity is Feeding Tampa Bay – the largest food rescue and distribution organization in the community. Mainsail actively supports the cause through a variety of employee and guest programs ranging from packing and sorting at the warehouse to annual events including Pumpkin Fight and Epic Chef Showdown.

The Autograph Collection is an evolving ensemble of strikingly independent hotels. Exactly like nothing else, each destination has been selected for its quality, bold originality, rich character and uncommon details. From near to far, iconic to historic, the result is an array of properties that is nothing less than unique, nothing short of collectively exceptional. For more information and reservations please visit www.autographhotels.com, or explore our social media channels to learn more about championing the independent spirit.

Inquiries from the media can be directed to:
Maria Hayworth
Hayworth Public Relations
(386) 677-7000 ext. 1
[email protected]